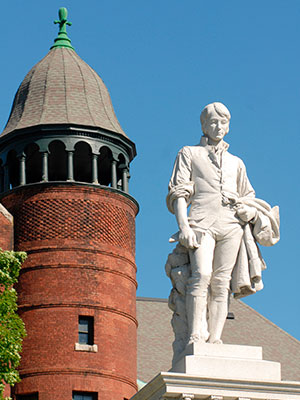 The City of Barre is the heart of Barre (pronounced Barry or Berry, as you prefer). Here, residents roll up their sleeves and work together to get things done.

The strength of this community tradition comes from a history of immigration of Europeans drawn to Barre’s legendary granite quarries. The self-titled “Granite Center of the World” still relies heavily on granite trade and sculpture, but has diversified. Barre granite is famous worldwide and artists continue the craft at the local Stone Arts School in Barre.

The Barre Opera House plays home to nationally renowned musicians and bands, as well as the local troupe of four-year-old ballerinas. This beautifully renovated auditorium shares the same address as the local municipal offices across from the town green.

Barre City was established in the valley when harnessing the power of the river fueled its growth. As the City grew people moved to the surrounding town for more space and in the second half of the 1900s, neighborhoods evolved up on the hillsides.

The Town of Barre offers a more rural backdrop with the same convenience. There are four distinct settlements within Barre Town: South Barre, East Barre, Graniteville, and Websterville. The town of Barre's most notable attraction is Thunder Road, the self-titled “Nation’s Site of Excitement,” attracts racecar enthusiasts each week during the warmer months. Be sure to watch the “Run What You Brung” race where a bread truck might be seen competing against an ambulance and you’re likely to glimpse your old 1984 Dodge Omni on the short track.