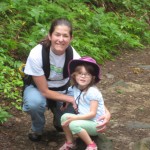 Along the Trail on Spruce Mountain

Despite threatening skies and a bit of drizzle, we had a great hike up Spruce Mountain in Plainfield on Sunday.

The best part? Our four year-old, Josephine, hiked up and down the entire four-mile round trip  - she even made it up to the top of the fire tower at the peak! - only fading in the last 500 feet. I was tired by then too, so I can't fault her.  She's building her case for being a Vermonter, despite her parents' bad luck of not being born here (and her grandparents, and her great-grandparents .... ) I'm giving our two year-old, Willoughby, some credit, too.  She only slept for part of the hike, gently jostled in a backpack all the way. I'm also thankful that very few graham cracker crumbs made it down the back of my shirt. 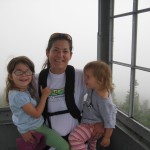 Along the Trail on Spruce Mountain

This being Central Vermont, we unexpectedly ran into friends along the way. When we arrived at the trailhead parking lot, there were two other cars there.  As we approached the summit, we heard the unmistakable chatter and activity of other families with kids. It turns out that the other two vehicles had brought friends of ours from Montpelier!

Perfect day? After a trip to Bragg Farm for creemees, it pretty much was.